The Dubai Autodrome provides a Single Seater Experience, with their custom built open wheel race cars purposefully built for this school. I’m not too sure of the specs of these cars outside that they are powered by Ford engines, and don’t offer you a lot of help in the computer world (I don’t think any computery bits for you, actually.) They are sequential gearboxes which do not offer flat foot upshifts or auto-blip downshifts. I have never driven anything like this before, but there’s one big gear level for you to pull or push as you hit the clutch. There’s also no tach, and no gear indicator, no radio, and no air conditioning either. Come on guys it’s hot out here, at least give me something!

There’s lot of other fun toys in the garage to look at, they tease you with the McLaren Experience.

Similar to driving the Formula Yas 3000 at Yas Marina, we went out in a van together and did a couple of acclimation laps. Although at Yas we drove our own Clio Cup cars. No biggie. It rains rarely up here, and I was caught in a pretty bad downpour a few days earlier in Abu Dhabi – sopping wet by the time I escaped it – but that had a blessing: the small kinked oval peanut track normally used for this experience (Stage 1) was flooded! We were upgraded to the Stage 2. I don’t see on their website how or when to actually reserve a Stage 2 experience – I can tell you the track is a lot more fun!

The first track configuration on the top right is what is typically used for this experience. Third from the top is what we were able to drive. MUCH more fun! Although it is a FIA Grade 1 track that can be used for Formula 1 races, none are held here, as is done at Yas Marina. The track is an interesting and fun design, and had some cool elevation changes – something I rarely see back home in my Midwestern race tracks. 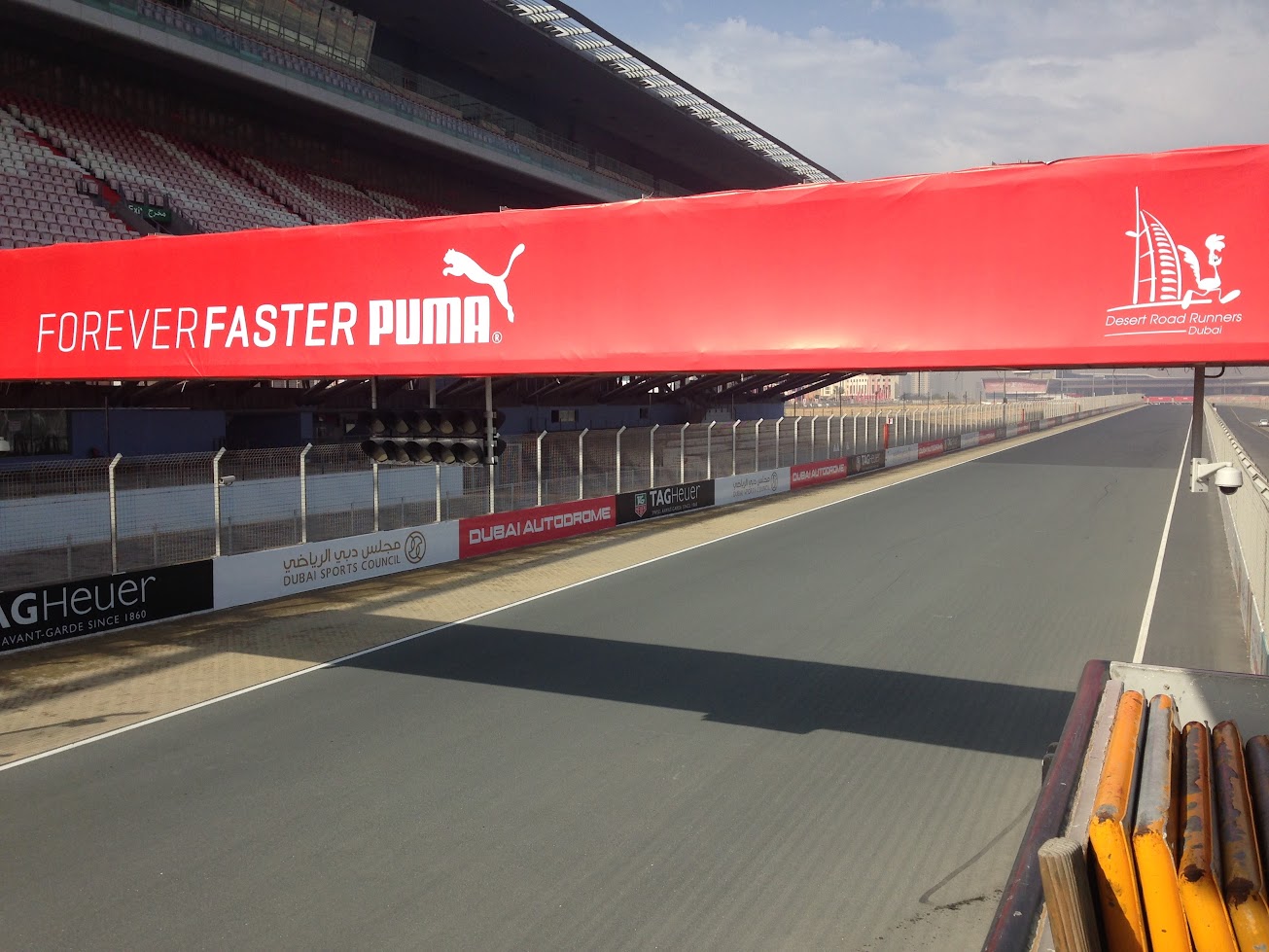 Similar to Yas again, the group was broken into two. We were to follow Audi TT pace cars. As long as we were doing well, they would continue to speed up.

No room for instructors in the cars we were driving of course. 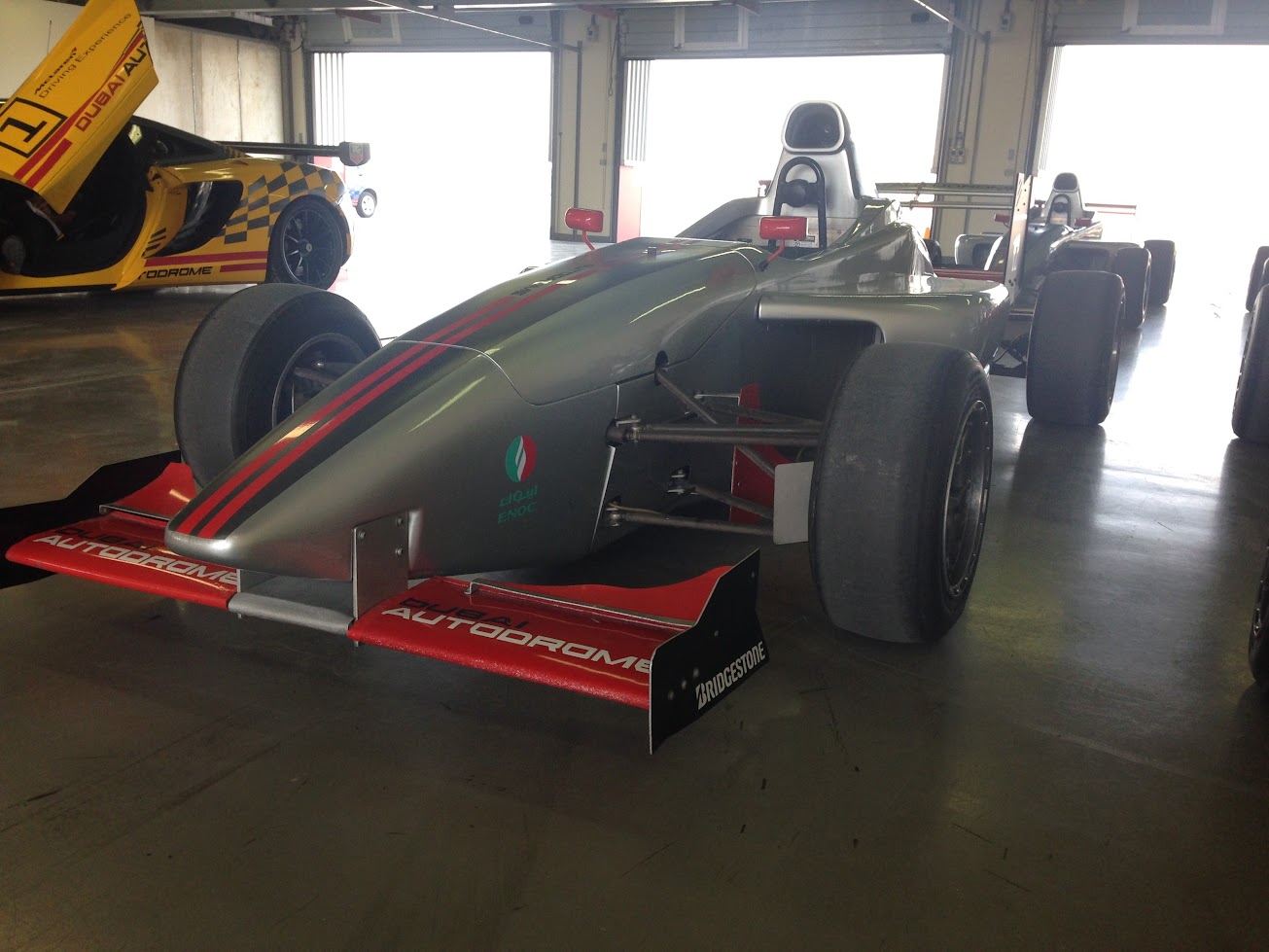 We had 6 guys, and initially went out as 3 people in 2 groups. At Yas, they asked about experience before classifying and arranging us, as they try to go in order of speed so no one is being held up and no swapping need take place during lapping – which will come out of your 20 minute lapping time. No one asked here, but I had my own helmet and mentioned I had done the Formula 3000, and was put as first in the faster group. The guy behind me though had racing shoes (I needed to borrow some again – my standard sneakers are too chunk for these, but good for me to heel-toe in my car at home) – he also sounded like he had driven these things before. The mirrors on these are pretty useless, so I don’t know if I ever held him up.

The other group was slower. We pit twice, although I’m not sure what all changes (if any) were made the second time. I know we passed the other group once, and I think at the first pit, one of the guys joined my group.

It is a pretty anxious and exciting experience getting to hop in and drive one of these – even with the paddle shifters making life easier at Yas. I wasn’t sure what to expect or how my brain would deal with having to do more work in these cars. I felt like I got acclimated with them and the track reasonably well by later in the session, and was feeling a lot more comfortable with the lapping. Unfortunately it was to end rather soon, leaving me wishing I had another 20 minutes left!

I actually rode the instructor a fair amount, not an unsafe distance but reasonably close. He’d pull away during some trickier parts more easily but I was getting brave enough to start driving them better as the session went on. Unfortunately, similar to Yas, once we got to the long straight, we would only push it so far as to allow those at the rear who did not take the turny bits as quickly to catch up and assemble with the group, to then push onwards. After the experience was over the instructor told me he could have gone further to let me run out a little bit harder, but we were having to wait for the group to collect. I am signed up for the Yas Radical SST next week, and will not be surprised if it is a similar run. It would be a big effort to swing for most people I think, but you’d get the most out of this experience arriving with a set of friends that are more ready to push these cars a bit harder, and fill up your own group yourselves.

The price for this experience is 875 AED, although I did the combo with the Easy Drift Experience for 1250 AED total. The on track portion is 20 minutes. I think this is a pretty awesome deal – there’s not a ton of places you can jump into a car like this and do so on a real deal race track at that. Comparatively to Yas experiences, it is much cheaper as well. Unlike Yas – you have a lot more to do in this car than the Formula 3000 – you are a lot more involved. No paddle shifters here, you are clutching, you can try to heel toe, they tell you enough stuff to scare you off from trying to clutch in and do 2 shifts down although I’m not entirely sure that’s something that is really going to cause you a problem. I certainly didn’t try it, although I think the guy behind me did.

Unfortunately, there’s a really strict no cameras policy. No GoPros, no anything. Not on the car, not on the helmet, not on your own helmet. Atlhough I was not allowed to take video, here’s one from a couple years ago of a Stage 2 experience from NeoJFK on youtube.