How To Mount Fire Extinguisher In Car – Bracketeer Review

A buddy had mentioned possibly bringing an extinguisher to the track for a car, and I saw some interesting homemade solutions to remove the cupholder in the brz and use that area to mount one. After doing some research however, I ended up with a universal mount and a larger fire extinguisher.

The Bracketeer is a universal seat mount which is relatively easy and straightforward to install even for a butterfingers newbie. The hardest part about my install was simply deciding how and where to put it.

The video is a great run through of the product and how to install it. Although he advises the back of the seat for the 86, that just wasn’t happening for me. Even with a smaller extinguisher I’m not sure how it would fly, it seemed to make the seat unusable to me. I guess you may not mind that at a track day with no passenger, but I take instructors/friends and am lazy and didn’t want to take the extinguisher in and out of the car. So I mounted it in the front. I thought it might be in the way but it wasn’t remotely in the way for me seating normally in the seat (6’2″) – I can no longer move the seat forward – not even one notch – but that is a who cares problem to me. Also one you may not run into if you’re not installing this into a compact sports car. Far preferred over not being able to move it backwards! It was also a little tight in here given that the seat only goes so far back and you need a certain amount of room to get in there with the allen tools to install this thing. However success was achieved. 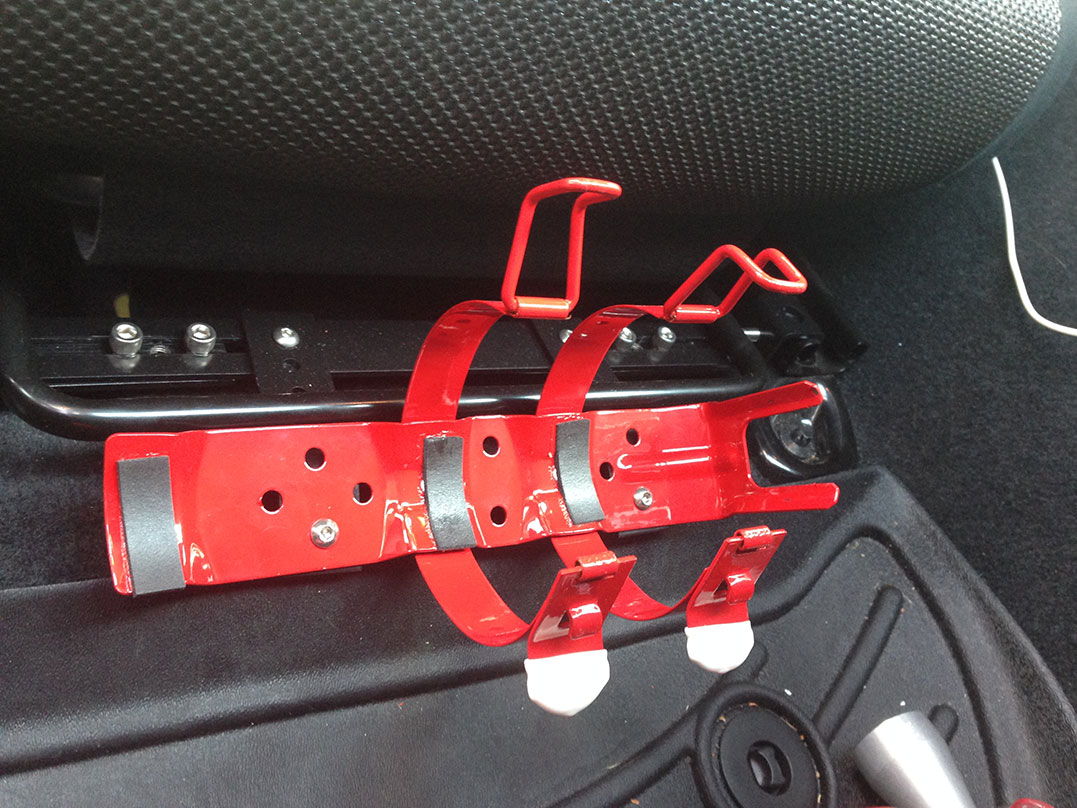 Which Fire Extinguisher For Car?

First you’ve got to decide what class you want. Fire extinguishers come in classes, at least in the US; what you are looking for is a Class BC extinguisher – one that deals with flammable liquids or electric fires. Class A are for dealing with combustibles like wood. Will an ABC work? Probably, but it’s got the nastiest stuff in it to clean up. You are not only trying stop the fire, but there’s the cleanup portion after the drama is all over, and the common ABC dry agent stuff seems to be the nastiest and the potentially most damaging. You want class BC.

Second, you’ve got a big choice to make on the actual agent. Most common and much cheaper are the dry agents dispersed by compressed carbon dioxide as shown in the video below. The drawback here is this stuff leaves a mess and can possibly damage things like electronics or corrode materials. After the fire is off, you want to clean this stuff off and out of the car as soon as possible. On the other hand, you have the much pricier halon and halotron options. These are liquified gasses that will shoot out in both liquid and gas form. A big plus is that they leave no residue, or at least no visible residue. Sites do mention cleanup procedures for both; it certainly seems far less worrisome in a car engine bay situation. Halon is being phased out due to its ozone depleting properties and has been replaced by Halotron.

Lastly you’ve got the size. I’d rather have too much than too little, at about 8:45 in this video you can see several extinguishers going off and how much time you get to work with, including a small guy vs 2.5 lb extinguisher.

I chose to purchase a 2.5 lb Halotron extinguisher from H3R.

How To Fight A Car Fire

As noted in videos about, use the PASS system – Pull the pin, Aim at the base of the fire, Spray the extinguisher and Sweep the area. If your car is on fire you may not have time to try and pop the hood and you don’t want to open it fully anyway. I think the ideal course of action, if you’re out somewhere and it catches, is to grab your extinguisher and try to pop the hood as you exit the car. That will give you a little larger opening for the hood in which you can try to aim the extinguisher in. You can also try to shoot up from under the car. It’s probably going to need to be opened to complete extinguishment but you shouldn’t be in a hurry to do it. Hopefully by the time you’re ready to do this you’re also seeing some help arrive from a corner station or somewhere.

A friend noted that most fires actually occur in the paddock, and that it’s worth keeping a tiny cheap extinguisher around for small fires that can occur there.

Overall The Bracketeer is a great product, and one I don’t hesitate to recommend. I’m happy with how the system turned out and having the extinguisher available if I need it. The second track day I attended with this car actually had a small fire in someone else’s car in the paddock, although it was under control by the time I was ready to pull the trigger. You can pick up both The Bracketeer and fire extinguishers on Amazon, the following are what I installed in the BRZ.