In my first attempt at an Autobahn analysis, we were all reasonably close. I’ve been around it enough but for whatever reason am far more timid around GingerMany Raceway in South Haven, MI, and am much further off pace. Posting a best of 1:53.763 at the 2018 GridLife Midwest event and our first scored Midwest 86 Cup event, this article will compare a better driven and different but largely similar enough 86 that ran a 1:47.445, to see where the biggest gaps are and where the most driver mod needs to take place. I am in blue, and my friend is in the red car.

I don’t have video available from either of our cars, but to get a sense of the track, here are some hot laps in the Speed Academy FRS.

Data all provided from first gen AiM Solo DL. The Solo 2 is now available as well. 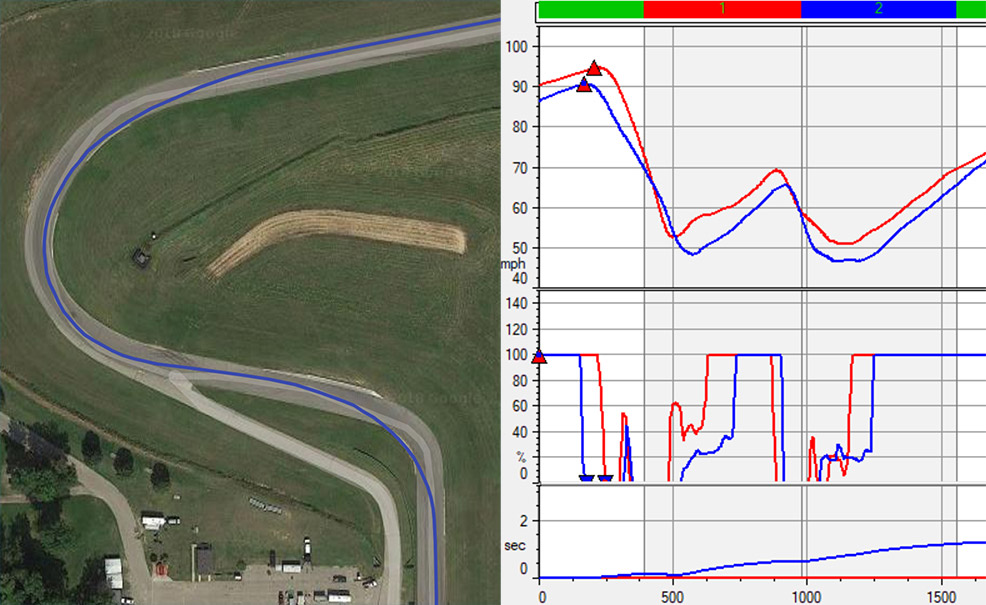 From top to bottom, the data is GPS Speed (mph), throttle pedal position (0-100%), and gap in seconds at this point in the lap. Can you spot everything I’m doing wrong here? Take your time, as it is a long list… 😉

I think my line is generally pretty good through here, it’s actually executing it at the appropriate speed is the challenge for me, which I’m doing much more conservatively than need be. I’ve already lost about 1.2 seconds in this section alone. 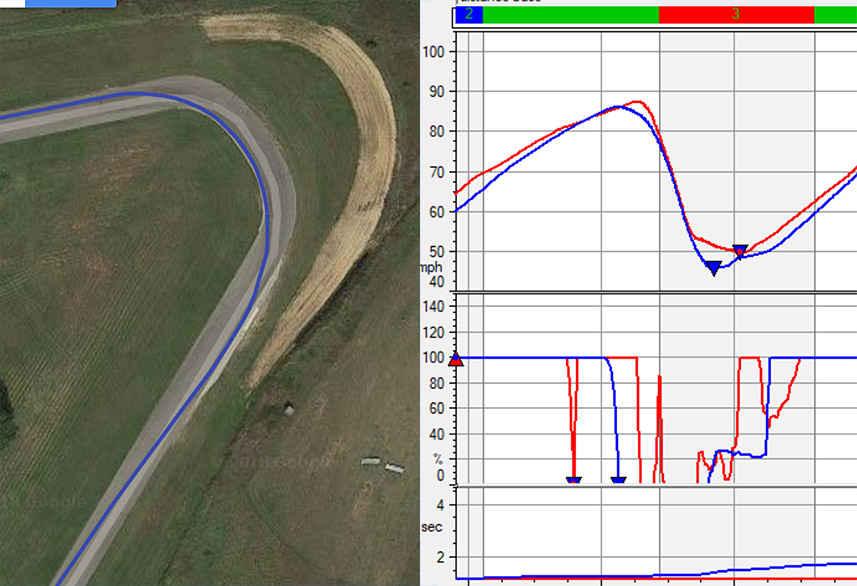 The red car gets to 4th gear here – I’ve stayed in 3rd. I believe I’ve chased down the red car on the straight purely from being on e85. Nonetheless I still brake earlier and from a lower speed. I slow to a bottom of 45.7, while the red car bottoms at 49.7. I’m late on the gas again, but the e85 is helping me out. Measuring from 100% throttle before the turn to after, I’ve lost about 0.3 seconds. 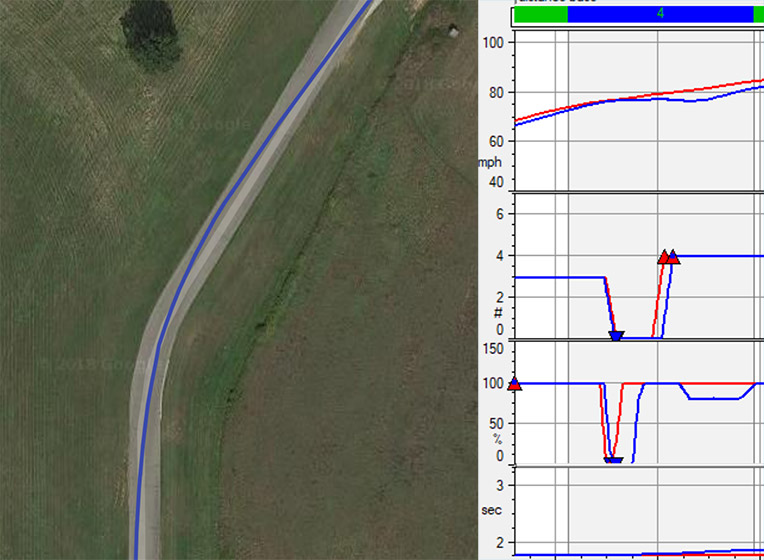 Turn 4 is just a kink. I added gear to the data, and we can see the red car shifted earlier than I did, and per the throttle, more quickly as well. I didn’t lose much time here due to a straight and the e85. However I did have a dip ease off to 80% throttle – not sure why, I may have given someone a point by here? I lost a little time, although normally probably wouldn’t have lost any.

This is where things get trickier. There’s a definite question of how much to apex 5, if any at all. I’m under the impression that the fast way to go through here is apexing turn 5 or being a car off, heading towards its track out, braking for 6 and trail braking into the left with it helping rotate the car. I can’t recall a time I executed this well; I seemed to mostly just overslow the car, and I think turn in a bit earlier than I should as well. Turn 6 has a large amount of track out, and a car that really gets these turns right has a lot of fun and really blasts through here. Unfortunately that’s not me!

Once again, I brake much earlier, and too much. The red car carries much more speed through 5, which has a lot to do with setting up for 6. I carry less speed through 6 although interestingly enough exit about the same rate. In fact I even gain a tiny bit on the next straight and before Turn 7. However, I lose a lot of time through 5-6 as a whole; 0.97 seconds.

Turns 7-8 are the same as “old” GingerMan, turn 9 is now a long sweeper throughout the end of this map. In the 86/BRZ/FRS you only need to brake for 7, then see how big your balls are as you go throughout this series. I’m typically much more comfortable in my mind doing a brake and then turn – so it’s unsettling for me to to straight into 8 and then just turn left into 9. All the more so because the transition from turning right to left is done quickly. I don’t think I have much of a clean line going all the way throughout 9, my brain feels more trained to drive onto the old route than the new longer 10b GingerMan.

I’m slower coming into braking here as a result of the prior chain. Also continuing my general flaws of overslowing and being late on the throttle. I’ve also included the blip on the straight where we shift, with the red car shifting faster than me into 4th. I out accelerate down the straight thanks to the e85. A bit over 0.4 seconds lost here.

The most likely place to go off and actually hit something at GingerMan – and I’m taking it conservatively around, a bit too conservatively to be fast. I got off the gas way early compared to the red car. I didn’t add the brake pressure here, but I actually paused between getting off the throttle and hitting the brake – a full 2 seconds actually, yikes! I checked another lap and I was doing the same, but for 1 second, which is still really quite bad, but a poor habit I definitely have around this corner.

At one point our braking matches, yet I keep continuing and brake down to 48.5; meanwhile the red car only dips to 57.5. We appear to get back on the throttle at the same point, although myself much less. I lose a good 0.8+ seconds through the actual turn.

I really need to step up my game at GingerMan; practice some new things and get comfortable pushing the car some more. I was advised to brake earlier and more softly to carry more speed and momentum into the turns, which I think will help me inch up my brain’s limits. I’ve only been to GingerMan once a year for the past few years, although I need to visit a bit more often to drop these bad times (and bad habits)!