Do you need an oil cooler?

First off, do you even need one? This is going to depend on how you’re driving the car and what you have done to the car. I’ll lump street and autocross together since I think you probably even get warmer oil just cruising down the highway at a steady 80 mph than you do from a set of autocross runs. N/A for this stuff, you’re fine. If you have forced induction you’ve got more power, and if you’ve got a turbo, that oil is absorbing heat from the turbo too. I’m skeptical it’s a real requirement at that point, but it’s certainly not a bad idea. Per this thread, a turbo car went from some highway pulls going from 220 F to 190 F and cruising going from 208 F to 183 F. Personally I don’t find any of these numbers concerning and actually think 183 is even low. You’d have to be doing something like canyon driving or driving so crazy I’m not sure how long you could even get away with it on the street to really get high numbers.

Track driving is a different beast, you’re generally putting 20+ minute sessions on your car with an average load of around 5500 rpm. Hard to simulate that on the street. Occasional tracking or totally new people may not be putting the hurt on the oil but frequent trackers and intermediate level people will be getting the oil to 270, 280, even 290+. I’m not that quick (a bit quicker now though!) and you can see my oil in this video track up to 275+. I’m coming on at 180, 10 minutes in 270.

Depends who is answering on the internet… I don’t know, other than I know it’s not 275 F. I’m under the impression from this and other threads at bobistheoilguy that nothing is particularly problematic with the oil itself until it starts getting to a rather high 300 degrees or so. That being said the oil is thinning out as it grows warmer and oil pressure is dropping. What should that be? That also doesn’t appear to have a very clear answer either, but it is generally said to be 1000s of rpms + 1 * 10. So at 5000 rpms it would be (5 1000s + 1) * 10 = 60 psi. It can drop a lot once warm.

The 86 platform advises 0w20 which I generally think is fine for a street driven car and ideal for the winter. It advises 5w30 if the car is being pushed harder. I’m currently on 10w30 for a summer driven car but once I run out plan on changing to 5w30. I use Amsoil synthetic and the only other data points I have to compare it to are savagegeese‘s supercharged car with an air/oil cooler. Some things to note here – one vendor’s 10w30 is not another vendors 10w30; I have oil temp measurements in both a sandwich plate and my OBD2 AiM Solo DL data and oil pressure from a sandwich plate. The temp on the gauge appears to read a little high. SG’s pressure gauge is plugged into the oil galley near the throttle body. 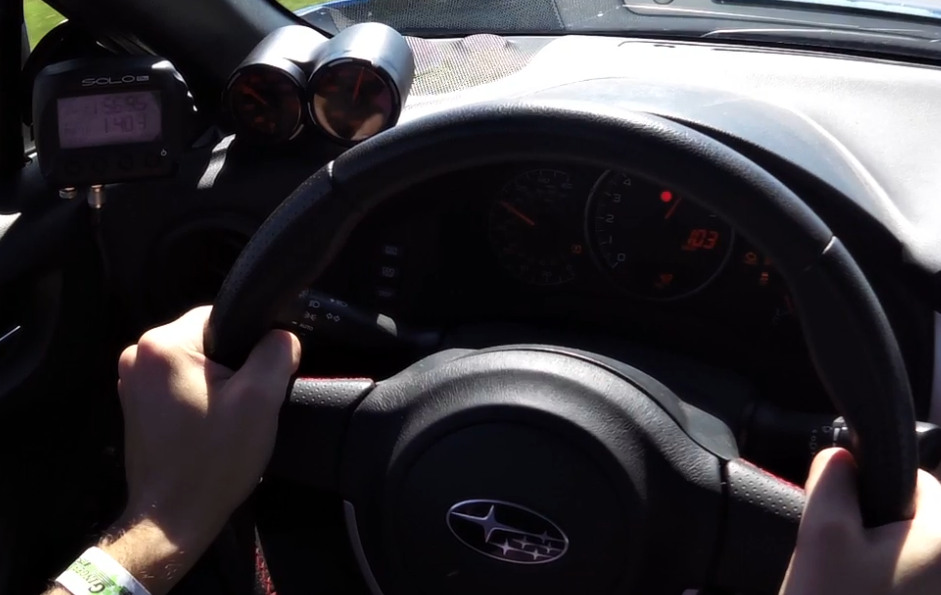 There are pluses and minuses about both these style kits. 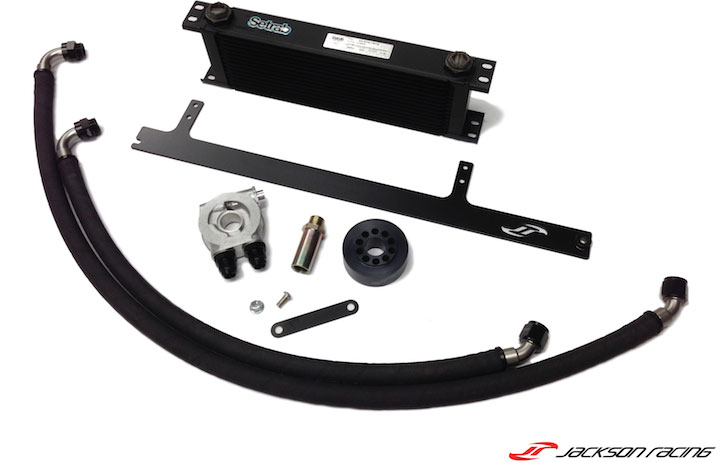 Air/Oil Cooler – you can roll your own or buy one of the many options – you have a lot of options and flexibility here, however it’s far more expensive of an option. The actual cooling unit alone is going to cost you as much if not more than the entire Forester OEM setup. However you have a lot of control over what you put in there and over your capacity to dissipate heat. I have yet to see boosted track car data with the Forester setup (please let me know if you have some!) and at the moment speculate the air/oil style intercooler may simply be required. Aside from price, the negatives here are that you have to run new oil lines now. You’ll also be filling up the car with a bit more oil, and oil that won’t be drained out during a change; although with a smaller cooler this is a negligible amount. While your oil pressure should benefit from being lower, having to pump oil through this cooler also actually costs you oil pressure; the oil has a longer distance to travel and now there is more restriction. The other downsides of this kit are now it takes even longer for your oil to warm up – especially if you are driving the car, and moving air through the cooler. One of the things I was surprised to see after installing my gauges was just how long the oil took to actually come up to 180 F operating temperature. It makes me think many autocrossers may not even be up to temp by the time they get their first run, it’s surprising. This is particularly problematic for winter driven cars. You are probably going to want an oil valve thermostat to help out with this problem to control when oil flows through the cooler, and for a winter driven car, may consider closing it off entirely for the winter or blocking the oil cooler with a piece of cardboard or something. 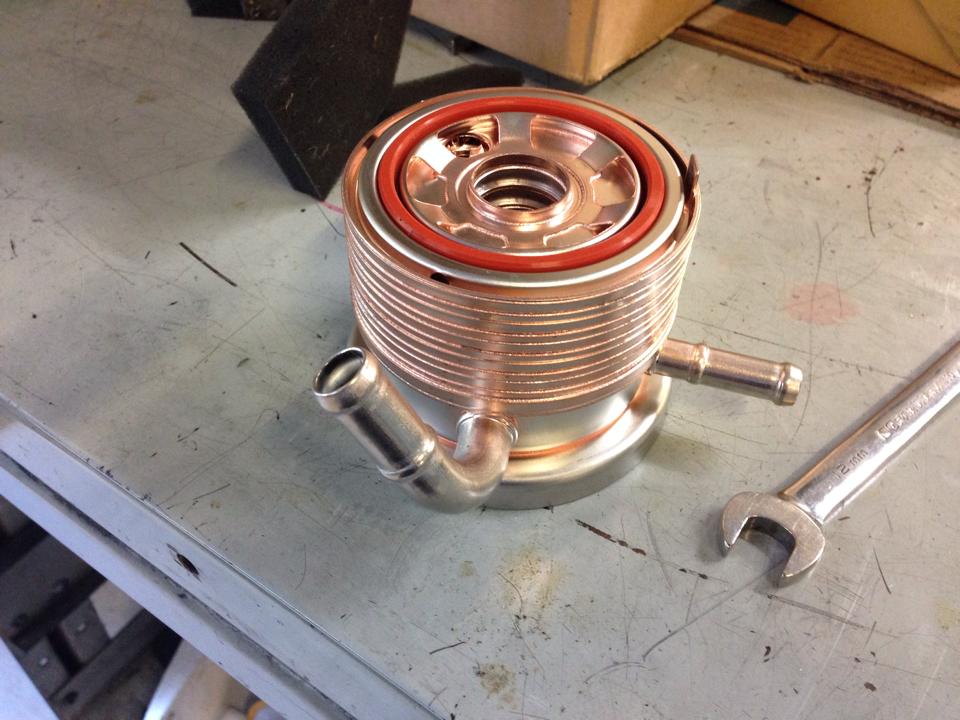 Water/Oil Cooler – this is the style where rather than oil being brought out to a cooler and cooled by air, we instead bring coolant up to a housing and run both oil and coolant through it, exchanging heat from the hot liquid to the cool liquid. Why don’t I say from oil to coolant? When you start up the car, the coolant is actually warming up more quickly. So a nice benefit here is that it is also warming up the oil in this exchanger, so the oil raises to operating temperature more quickly. A great benefit, especially in the winter. This kit is also a ton cheaper. However, it does not perform as well as an air/oil cooler under extremes. I think it’s doing great for me on a N/A track driven car, although am less sure what the world would look like with something that had near 300 whp. This approach also adds heat to the radiator, although the OEM one has sufficient capacity to expel it. I did however install a Koyo radiator at this time.

There’s a fantastic parts list and install thread for the Forester XT OEM Cooler on FT86. Some people have plumbed it differently to get coolant from the throttle body – which we’ll see appears to be the better way to go.

Although Stefan is driving his car harder, his oil is cooler than mine. If you install this cooler, get your coolant from the throttle body. His coolant is doing great. Despite my coolant being lower, his oil temperature is still lower. I’m curious what the combination of the Koyo and plumbing through the throttle body would look like. Marcel has an air/oil cooler and as expected, his oil is doing the best – those are fantastic track temperatures. Adam has no extra oil load yet his coolant matches Stefan’s – this makes me wonder whether Stefan’s coolant is higher because of the oil or because of something else. Adam’s oil temps are similar to mine, although as his lap speed picks up, some style oil cooler should be on his list to add to the car.